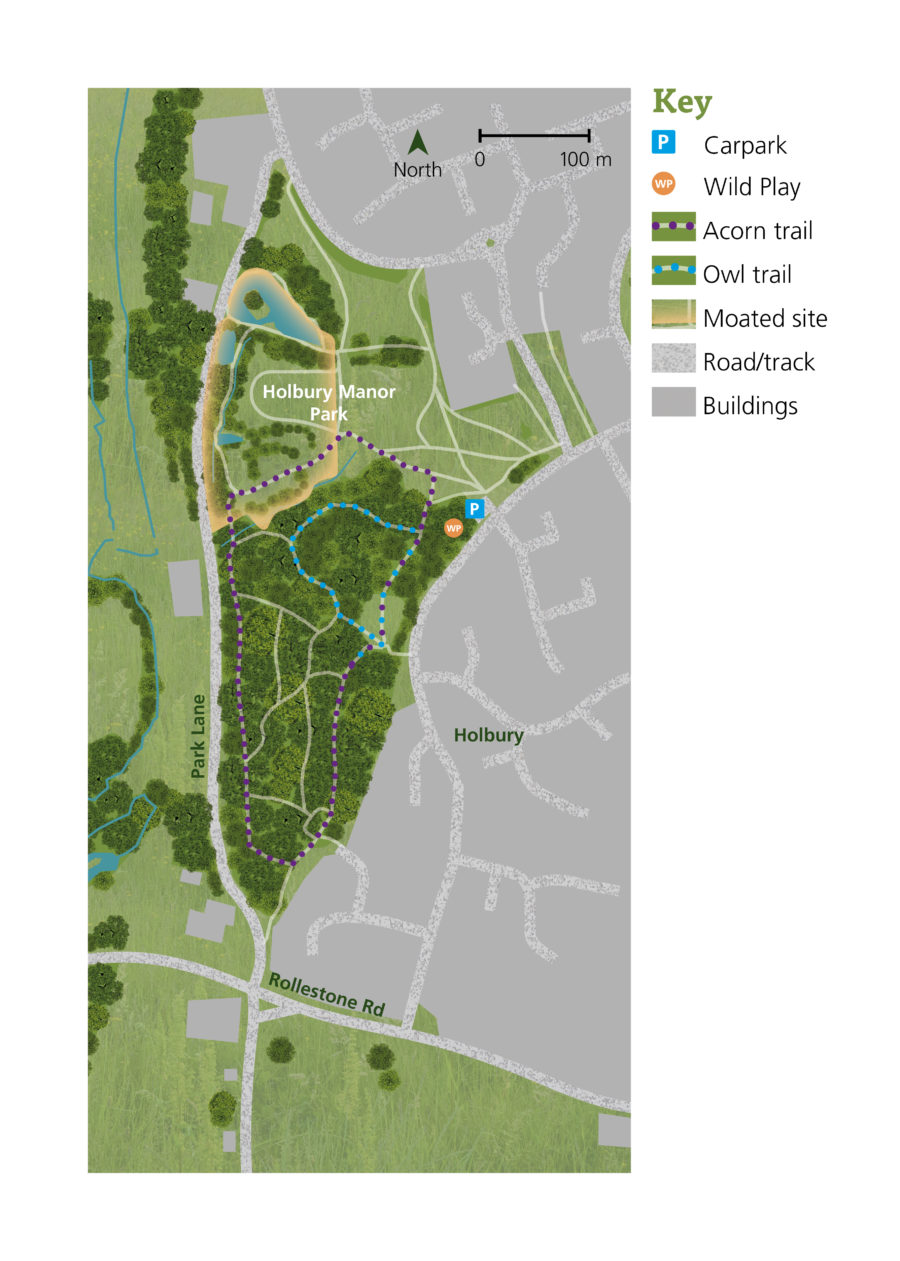 This area consists of an ancient woodland site and open grass lands for everyone to enjoy and is the on-going project for a local conservation group. The Manor field will be left in order to let the grass grow and provide a natural environment and promote the wild flowers and grasses. The existing paths will also be cut to maintain access around the Manor. This will be completed as part of a structured maintenance plan.

The site has ancient fishing lakes and a moated area with a number of pathways for ease of access which are currently being upgraded.

Holbury Manor was acquired by Fawley Parish Council over a number of years, with the purchase of the land at the bottom end, which included the ponds and moated area, and was designated as an Ancient Monument Site in 1979. The rest of the Manor area was acquired as 106 agreement donations by developers who were developing the other areas of the original Manor Estate. The final section was acquired when Shapton Close was built in 1996.

In 2009 the Parish Council were offered the chance to purchase Warren Copse, a semi ancient woodland using the Parish 106 agreement contributions held by NFDC and acquired the copse to supplement the area of Holbury Manor they already owned. The area was included within the New Forest National Park when it was designated in 2005. The Manor Park and Warren Copse are 10.45 hectares (25.8 Acres) in size, split nearly in half between the Manor Park and Warren Copse and the area has been designated as a Site of Importance for Nature Conservation (SINC).

History of the Manor

The Manor Park and Copse is all that is left of the original Holbury Manor. It was first created from Forest Waste land (open forest land) in the 12th Century in about 1180, and stretched from Rollestone Road to the south, Long Lane to the east and to just beyond the Hardley roundabout to the north. In the mid 13th Century in about 1260 it was taken over by the Beaulieu Abbey as one of its Granges. It was used as a farm growing wheat, oats, vetch and peas. They also created ponds to farm fish, mainly Carp which was used as currency and gifts.
In 1538 following the dissolution of the Monasteries by Henry VIII the Manor reverted to private ownership. Although the previous Manor buildings were in the Moated Area, the new owner in 1543 Thomas Pace, built a new house on the present site on higher ground which was finished in about 1550. It was rebuilt in the 17th Century much looking as it is today, although the new building was rebuilt again recently in the old style, but as three houses.
In 1951 the new tenant Mr Wiltshire began to farm the 53 acres that was left of the farm, and he lived in the Manor House. He had an interest in the history of the site, and with the help of the Southampton Museum Service undertook test pit archaeological investigations around the farm and the moated area. Pottery from the later Iron Age, New Forest Ware and Coarse Ware from the later Romano/British period was found. In addition some broken medieval encaustic tiles and pottery were found from the period when the area was part of the grange of Beaulieu Abbey. There may have been occupation in the area from the Iron Age, followed on after by the Roman occupation. The route of the Roman Road from Lepe to Dibden may have crossed the Holbury Manor site. It has not yet been established when the moated area was constructed, but as the private ownership only lasted 60 years before it was taken over by Beaulieu Abbey, it was probably constructed by the monks to enclose their accommodation.

Very little is known of the history of Warren Copse, although there is evidence that it has been used in the past, possibly to supplement the farm activities. On the lower banks there is extensive hazel that probably was coppiced over the years to make fencing and wattle etc.
It is an ancient and semi-natural woodland with many veteran oaks, extensive ash, birch and wild cherry dominating the canopy. The understory is mainly of hazel with hawthorn, holly, elder and field maple also present.
The landscape has been shaped by human involvement over the years, with the creation of the moated area, and the pond system. Even the grassed areas have had varying degrees of building remains, and ancient drains have been damaged by ploughing over the years. 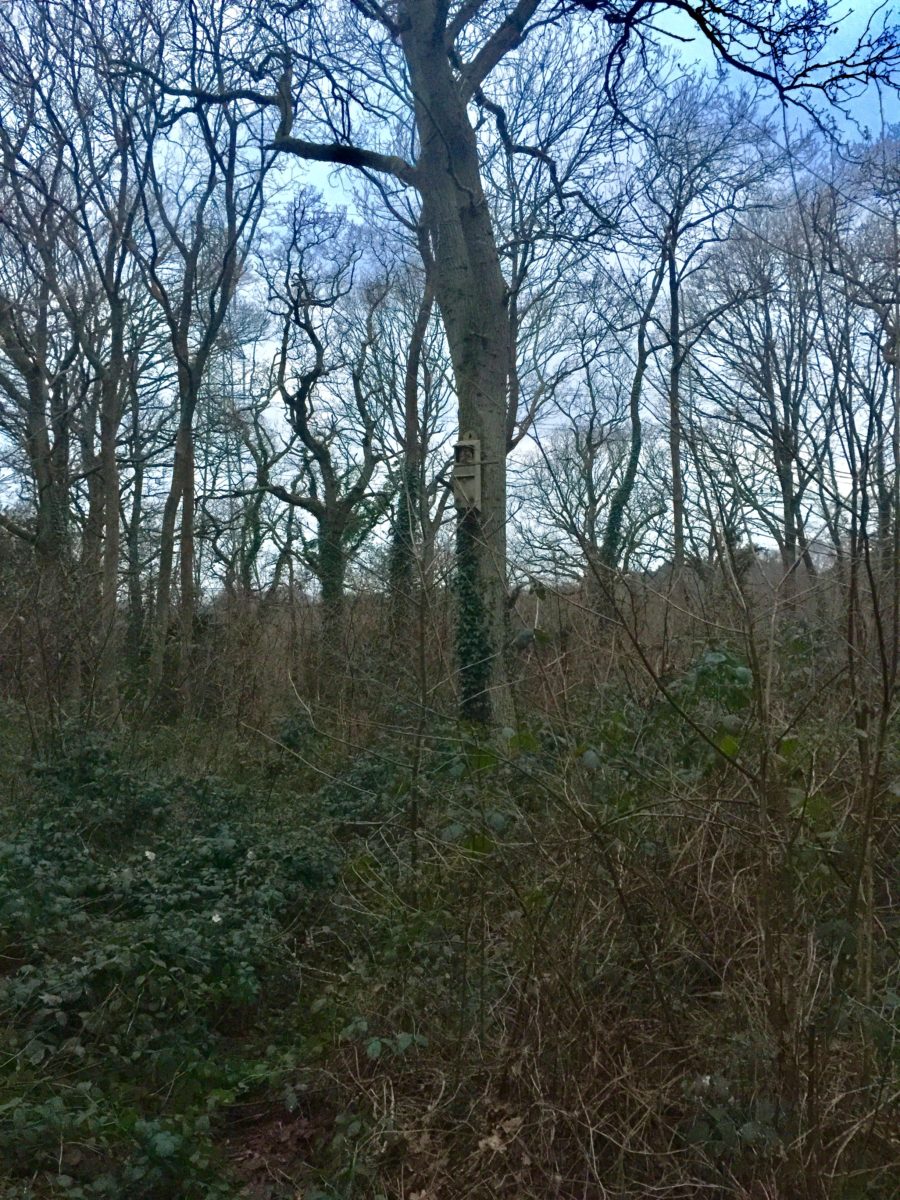 Wildlife at the Manor

Local members of the RSPB have also been surveying the bird population to discover whether the tree work will have any impact on their numbers. Some 23 species have been recorded. The woodland birds include song thrush, great spotted woodpecker, nuthatch, tree creeper, chiffchaff and blackcap while black-headed gulls and herring gulls frequent the fishing lake. The lake and ponds are home to a couple of families of mallards and moorhens in the spring.
Warren Copse forms part of the territory of a pair of tawny owls and the conservation group put up a nest box. In February and March 2016 and 2017 the owls were seen inspecting the box which caused great excitement.

In the spring before the tree canopy shades the woodland floor, there is a spectacular display of flowers including celandines, wood anemones, dog violets, greater stitchwort and primroses. These are soon followed by bluebells. Some flowers are not so obvious and need to be searched for such as wood sorrel, wood speedwell, pignut and sanicle.
On warm, sunny days, butterflies can be seen flying through the glades. These include brimstones, speckled woods, red admirals, peacocks, commas, holly blues and green-veined whites. Out on the Manor on the damp meadow, the flowers of lady’s smock or cuckoo flower attract orange tip butterflies. The female butterfly will lay only one egg on each plant. In high summer the meadow is awash with butterflies including meadow browns, small tortoiseshells, marbled whites, gatekeepers, large whites, common blues and small coppers.
Common marsh orchids, yellow flags and purple iris are in flower along the edge of the fishing lake which attracts damselflies and dragonflies including the common blue damselfly and the emperor dragonfly. 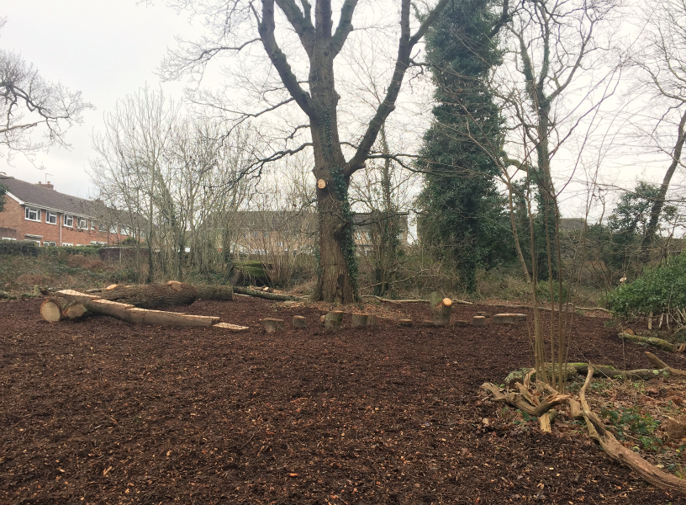 Play at the Manor

Holbury Manor Park will be developed as an area for recreation, amenity and nature conservation for the local community and the woodlands will be managed sensitively.
Access across the site and through Warren Copse has been improved with the main footpath through having been dedicated as a Public Right of Way, and the minor paths being cleared and widened for easier access. The surrounding habitats will be managed to conserve and enhance the biodiversity of the area. The archaeological features will be protected and managed according to English Heritage guidelines.

It is hoped that Holbury Manor Park will be used by school children, as a valuable educational resource. An initiative put forward by the National Park to help children discover and connect with nature has led to the development of a Wild Play Area in Warren Copse. This was opened in 2018; it also has a long nature trail signposted with acorns and a shorter one, signposted with owls.
Before any work could be commence on the play area, bat surveys were carried out by two people from the Hampshire & Isle of Wight Wildlife Trust in June and July 2017 to ensure that the trees were not being used as bat roosts. No roosts were detected in these trees, but both common pipistrelle and soprano pipistrelle were recorded flying and foraging in the area. The bats appeared within 7 minutes of sunset which suggests that they were roosting in nearby trees or in the roof voids of the houses along the boundary of the Copse.
The University of Southampton also did a bat survey earlier in May 2017 and recorded a Natterer bat in the southern end of the Copse. This bat is relatively rare in the UK.
Students from the University were asked to carry out an invertebrate survey over the next three years to monitor any changes that occur. They are on a non-residential New Forest Field course and Warren Copse and Holbury Manor provide an ideal classroom to discover the diversity of wildlife in an ancient woodland and out on a wildflower meadow. They are also investigating the snail population, bumble bees and birds.
Warren Copse provides an ideal habitat for dormice and the students thought they had found a nest in 2016. It would be wonderful to discover that these rare mammals were living here. Hazelnuts were left as bait by the nest to see if there were any dormice about, but these were nibbled by bank voles so for now there is no sign of these elusive creatures. 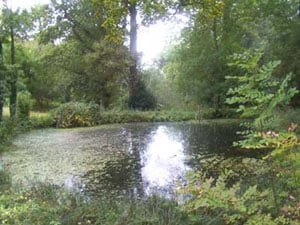